Valerian Tea – Does It Really Help People with Sleep Disorders?

Valerian tea is made from Valeriana officinalis -- the Valerian plant. Known as “nature’s Valium” (for the popular sedative), Valerian root relaxes and soothes you. Throughout history, people have reported using Valerian to ease anxiety, soothe upset stomachs and cure headaches. Researchers recently studied the potential of Valerian root in addressing attention deficit disorder, but the outcomes were inconclusive.

More and more people consume Valerian root as a tea to address insomnia. Once you learn how it tastes, where it comes from and where you can get it, you just might decide it's the solution you've been looking for.

What Is Valerian Tea?

Valerian tea is an herbal tea sold under various brand names such as Nighty-Night Valerian from Traditional Medicinals, Sleepytime Extra from Celestial Seasonings and Get Some Zzzzzs from The Republic of Tea. The main ingredient of Valerian tea is the dried root of the Valerian plant. You'll find Valerian in health stores or supermarkets in other forms as well. 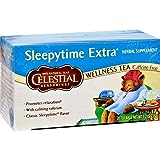 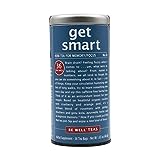 The Republic of Tea, Get Smart Tea, 36-Count
Buy on Amazon

One of the advantages of buying commercially available Valerian tea is that tea-makers will typically add in other plant-based leaves. Many note that Valerian tea produces a pungent odor and taste -- like dirty gym socks. The added ingredients help smooth the tea going down. Various products combine Valerian with Rooibos, chamomile, orange peel, spearmint leaf and passion flower, for example, to create a more balanced taste.

It works the other way, as well. Some tea-makers will introduce Valerian root into other teas to try to capture the relaxation properties. Check the labels, as this means you don’t necessarily have to buy “Valerian tea” to get the benefit

How Does Valerian Tea Work to Promote Sleep?

The dried Valerian root in tea contains components that will take you from wide awake to fast asleep in no time. Studies have shown that Valerian has high concentrations of flavonoids, and alkaloids, which are known as “anxiolytics,” or compounds that reduce anxiety, promote relaxation and mitigate muscle spasms. The exact mechanism of how Valerian works is not widely understood, though some studies suggest that it enhances levels of a certain brain chemical.

THE HISTORY OF VALERIAN

Reports of the medicinal benefits of Valerian go back several centuries, to the days of ancient Greece and Rome. They’ve even made their way into lore: some have suggested that the Pied Piper of Hamelin was able to lead the rats out of his German town not by playing his flute, but because he had Valerian root in his pockets. Valerian also plays a role in the world of Harry Potter, and some report using Valerian to make “magic sleep potions” and love pillows.

The National Institutes of Health notes changing perspectives on Valerian over time. In the 1500s, people took Valerian to treat nervousness, trembling, headaches and heart palpitations. Three centuries later, some saw it as more of a stimulant that exacerbated, rather than cured, anxiety. But by World War II, the English were taking the herb to calm themselves during air raids.

Researchers have also tried Valerian root for a gastrointestinal upset, epilepsy, and ADHD, but the outcomes are inconclusive.

How Effective Is Valerian Tea for Sleep Disorders?

The scientific evidence on the effectiveness of Valerian for insomnia is somewhat mixed, with some studies showing promise. German researchers, for example, looked at the impact of Valerian on 121 people with documented insomnia. The researchers gave half of the participants Valerian root in commercial form and the other half a placebo for a month. The half given the Valerian extract reported greater improvement in insomnia symptoms than those who used the placebo.

The NIH reports on a larger study-of-studies, where researchers looked at the combined results of nine different randomized clinical trials studying the impact of Valerian on insomnia. The evidence was inconclusive. The NIH explains that some studies show Valerian root "may be useful" to help people get relief from insomnia and other sleeping issues, while other study results do not. Interpreting the studies was complicated, and marred by various factors such as small sample size, different Valerian root sourcing, and other issues.

Science Direct also provides a summary of the research into Valerian root.

Where Can You Buy Valerian tea?

In days gone by, you had to visit a health food or vitamin specialty store to purchase Valerian tea. But given its popularity, availability has spread. You can buy Valerian tea at many major retail chains, such as Wal-Mart, Walgreens, and Target. It’s also available from those stores online, as well as at specialty stores such as VitaminShoppe.com and the retail giant Amazon.com.

How Do You Make Valerian tea?

The easiest way to brew Valerian tea is, of course, to buy an over-the-counter product with the root already placed in tea bags. Boil water, steep the tea as the packages direct and then get ready to relax.

If you are more ambitious, you can also pour the boiling water directly over loose-leaf Valerian tea. Here’s how:

Some suggest adding lemon, milk or honey to your tea, to address that odd odor and taste we mentioned earlier.

Nature has provided many wonderful things to our world. Sometimes the simplest solution is one we can find right in our own backyard. Give Valerian root a try. You don’t have to become a Pied Piper. All you have to do is sleep.

Get the Latest News